Capital Flight and the Drying Up of Bank Liquidity

Although other factors may explain the flight of capital, such as the low climate of confidence, political and social instability, and rising inflation, this policy brief identifies two main sources of liquidity drain, namely the worsening of the current account deficit and the burden of tax regulations.

Tunisia has been suffering for many years from a rise in capital flight, a phenomenon that specifically affects developing countries. However, the definition of this concept varies depending on the degree of openness of the country to the rest of the world. The policy brief addresses portfolio diversification for countries that have liberalized their capital accounts, but it will be illegal capital outflows for countries that impose controls on capital movements. In the case of Tunisia, several exchange regulations have been introduced to restrict the outflow of capital abroad. Yet, these regulations have not prevented agents from using all possible means to circumvent them.

These illegal capital outflows mainly pass through international trade and are made possible through falsified commercial transactions. The over-invoicing of imports or under-invoicing of exports allow assets to be covertly transferred abroad. In addition, overcharging exports or under-invoicing imports allows agents to avoid paying customs duties or taxes. The overall amount of funds is measured by comparing the country’s official imports and exports to those of trading partners. More precisely, it is a question of comparing the difference in the level of commercial data with partners, after readjustment to transport and insurance costs. According to the GFI[1], in 2015 Tunisia recorded capital outflows amounting to $1.8 billion and inflows of $2.3 billion. Capital inflows reflect the extent of tax avoidance, which appears to be a symptom of a deeper dysfunction in the regulatory system.

These capital leaks pose two problems for liquidity: a drying up of foreign currency reserves and a loss of tax revenue.

The issue of capital flight is distressing for decision-makers because the drying up of liquidity in foreign currencies has several repercussions. Cuddington (1987), Ndikumana and Boyce (2012), and the African Development Bank and Global Financial Integrity (AfDB-GFI) joint report (2013) have highlighted the dangers of capital flight and the resulting loss of resources, depriving the savings in foreign exchange reserves necessary for debt repayment, external payments, and to support public spending. Furthermore, Adesoye, Maku, and Atanda (2012) and Saheed and Ayodeji (2012) have presented capital flight as responsible for the decline in investment since foreign capital transfers reduce bank liquidity that is available in any given economy.

The loss of tax revenue is due to the authorities inability to tax wealth possessed and income generated abroad, but also income generated or possessed within Tunisian territory. These losses are also worrying when they are outside the formal economy, insofar as they will support the informal sector’s development. The  growing informal trade sector poses a serious threat to the Tunisian economic landscape because it encourages smuggling, corruption, and money laundering.

The drying up of liquidity, a result of the aforementioned dynamic, has direct repercussions on the economy since it leads the Central Bank to increase its injections to avoid a liquidity crisis. Despite the reduced volume of refinancing from the Central Bank of Tunisia at the end of 2019 (11.4 billion dinars at December 31, 2019, compared to 16 billion in 2018[2]), it remains at a very high level compared to 2010 (0.960 billion dinars in December 2010).

To meet banks’ liquidity needs, the monetary authority’s interventions took several forms including a 24-hour loan facility, longer-term refinancing operations (6 months), and currency swap. Consequently, the monetary authority had to tighten the financing conditions by raising the key rate in March and June 2018, and in February 2019 (7.75%). It joined the rise in the interest rate with the introduction of a Credit / Deposit ratio for banks, which should not exceed 120% [3], and this to control the development of loans in the banking system.

This policy brief identifies two main sources of the drying up of liquidity, namely the worsening of the current deficit and the heaviness of the tax regulations.

The current account deficit increased to reach 11.2% of GDP in 2018, of which 62%[4] stems from the widening of the energy balance. This deficit is mainly due to the increase in oil prices on international markets and the weak national production of crude oil (38,400 Barrels per day in 2018, compared to 80,000 in 2010[5]). Measures have been taken since the 2000s to meet this increase in energy needs, by investing in renewable energy, but they have remained insufficient. It was only in 2014 that an Energy Transition Fund was created and the “Tunisian Solar Plan” was adopted. This plan aimed to increase the share of renewable energy in the energy mix from 3% in 2018, to 12% in 2020, and 30% in 2030[6].

The drop in the dinar’s value did not boost exports. The production of phosphate, which was a key source of foreign currency income for the country has observed a sharp decrease since the revolution, causing a drop in income from 1,500 million dinars in 2010, to 500 million dinars in 2020. Tunisia is currently ranked 8th producer in the world, whereas it was 5th before the revolution. Furthermore, the number of employees in the Gafsa Phosphate Company (CPG) has increased from 8,000 in 2010 to 30,000[7] while production dropped from 8.1 million tonnes in 2010 against 4.1 million in 2019[8].

The widening of the current account deficit remains critical insofar as its payment generates a strong demand for foreign exchange and forces the Central Bank to intervene by drawing on its foreign exchange reserves. The current account deficit and the pressure it exerts on liquidity depreciates the value of the dinar which leads to increases in the prices of imported goods. Given the problems linked to incompressible imports, the total effect is likely to cause the deficit to widen further.

In addition, expectations of a drop in the dinar pose another problem, since they fuel the speculative behavior of certain importers who find themselves having to make their purchases in advance to protect themselves against depreciation. This could generate strong demand for foreign exchange and worsen the current account deficit. Thus, a vicious circle of depreciation of the dinar is likely to set in, causing the devaluation of assets in dinars encouraging agents to seek better opportunities for their investments.

The decline in foreign exchange reserves makes external payments difficult and fuels downward pressure on the exchange rate. The latter therefore remains an important variable, dependent on macroeconomic fundamentals. Slowing capital flight cannot be done without controlling the current account deficit, the primary source of depreciation of the dinar. 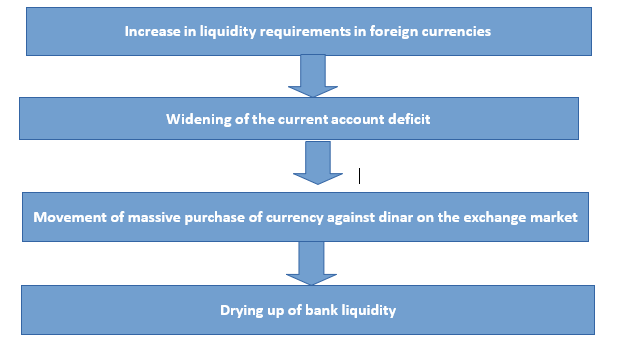 Current deficit and drying up of liquidity

Tunisia currently suffers from a complex and unstable legislative and regulatory environment.  More than 530 tax measures were introduced in the finance laws between 2011 and 2016 [Haddar and Bouzaiene (2017)]. This high instability of the tax system and the lack of visibility that it causes may lead agents to be more suspicious of public authorities. In addition, Tunisia is faced with a tax administration that has almost given up its designated  role of monitoring and collecting tax. This highlights a particularly worrying situation; leakage reduces taxable income and therefore tax revenue. This tax shortfall leads to State debt and the repayment of the debt creates pressure on liquidity in dinars and foreign currencies. These capital outflows have their origins in porous borders and a dysfunctional regulatory system. Despite the great progress made by Tunisian customs in the anti-corruption process, through the “islands of integrity” program, with the support of the NACA and the UNDP, the amounts of capital flight remain considerable.

The other worrying aspect of the capital flight is the expansion of the informal economy which has increasingly taken more space since the revolution and which, according to Nabli (2019) and Schneider (2018) represents 32 to 36% of GDP today. The liquidity that leaves the formal sector goes into the informal sector and threatens the country’s economic, financial and stability, and even security. Indeed, behind the rise in cash payments is the development of illicit activities, such as smuggling, the financing of terrorism, and money laundering.

Changing the banknotes is a possibility to reduce liquidity in the informal sector. While this proposition sounds interesting, the risk of seeing a currency rush should not be overlooked. As long as smuggling is active at the borders, the change of banknote risks generating a “dollarization” of the economy whereby as the actors of the sector will protect themselves by positioning themselves on assets in foreign currencies

Important lessons can be learned from India’s failed experiment in changing banknotes. The Indian authorities decided to engage in a fight against tax evasion and money laundering in November 2016 by withdrawing all 500 and 1000 rupee banknotes (the largest denominations) from circulation. This caused panic, leading people to rush to the banks, which led to a shortage of liquidity. Despite the controls put in place by the banks during deposits, almost 99% of the old notes were withdrawn from circulation and were deposited in the banking system, but  agents found a way to escape the tax authorities and exchange their old notes with new ones[9].

Capital flight across borders or out of the formal economy reduces the financial resources necessary for economic growth and development. These leaks lead to a drying up of liquidity and the tightening of business financing conditions, thus causing the Tunisian Central Bank to increase its injections of liquidity. Behind these leaks resides a fear linked to the high volatility of the dinar and the risk of devaluation of assets denominated in dinars, but also hides a great distrust of the agents concerning the public authority as regards taxation. Thus, it is necessary to tackle the factors that have led to the drop in the dinar and create a climate of trust that promotes private investment as well as fiscal transparency.

All of these measures must be integrated by decision-makers into well-crafted reform programs. However, such a program requires the political will of decision-makers to initiate reforms that generate broad popular support. Success also depends on  the authorities’ ability to impose good governance practices and respect for law enforcement.

• Raise public awareness regarding the need to control energy consumption. The state needs to increase development of renewable energy projects and investment in solar and wind power.

• Increase phosphate production apparatus. The State must intervene to protect national economic interests and ensure the proper functioning of the economy. In addition, encouraging job creation  is essential for the development of the phosphate producing region.

• Strengthen the customs administration’s partnership with the customs services of the main trading partners and strengthen border controls by setting up a risk management system with Global Financial Integrity, to improve the capacity of the customs authorities to detect false invoices.

• Strengthen the integrity and good governance of the customs administration by providing more financial and human resources to make this institution more effective in its fight against tax fraud.

• Strengthen the tax system by improving the administration’s capacity to encourage taxpayers to declare their income and capacity to collect tax revenue.

• Modernize the tax administration by increasing options for digitalization payment to help fight against tax fraud.

• Encourage “de-cashing” to reduce the use of cash in the economy and making electronic payment more accessible. The Central Bank has implemented the “De-cashing” project, the effectiveness of which remains dependent on the degree of support from the public authority (Tax Administration, CNAM, CNSS, CNRPS, SONEDE, STEG, etc.).

Noura Harboub is Assistant Professor at the FSEG Mahdia, University of Monastir and researcher in the DEFI laboratory. She works in the fields of international finance, economic policy and capital control and obtained her doctorate from the University of Paris13, France. She is also a member of the association DREAM (Dynamique de Réflexions Economiques à Mahdia).

On the same subject

Blockchain’s technology in Tunisia: Towards an economic recovery

DCFTA: An Uncertain Economic Impact and Irreversible Consequences on Society and Sovereignty